To Roast or To Steam, that is the question...

An oyster roast is as much about the event as it is slurping those succulent gems from the sea. Even if you're more of a "turf" than "surf" lover, everyone enjoys being outside around the communal table with the smell of an open fire close by.

Ask someone if they prefer their oysters roasted or steamed and it's almost as dividing as smooth or chunky! But when it comes to oysters on the Kettle, it's a winner either way. 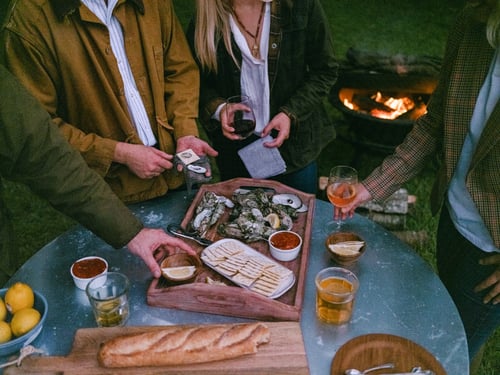 Roast oysters on the Grill anywhere from 6-10 minutes depending on how hot the coals are and how done you like your oysters. Use the heat dome to roll the smoky flavor over the oysters.

Steam oysters on the Griddle covered with a wet burlap sack to create the steam. Cook until they pop open if you prefer more well done.

"Prior to cooking, do a tap test on any open shells. Live oysters will close when tapped. If they don't, discard them. You can also listen and if you get a hollow sound, throw it out. This works for clams too."

"If roasting the oysters, cut your lemons in half and put them on the Grill before serving for an extra layer of smoky flavor."

*The FDA advises that consuming raw or undercooked shellfish may increase your risk of foodborne illness.